The Reversal of Ritual 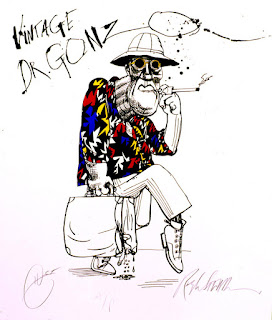 So I received three books in the mail yesterday. And there was a decent amount of excitement surrounding the delivery of these books, even though these would be books that would not take me more than a minute to read at most, nor would these be intellectually stimulating pieces of prose or political commentary.

I used to get excited when I found a used first edition hardcover of one of Hunter Thompson’s books. And then I would wait (usually for weeks, because those bastards at the used bookstore in Valparaiso, IN. where I finally found a copy of the book, don’t feel the same sense of urgency that we do as God Damned New Yorkers, and so while Hubert would eventually get his lazy ass in gear to package up my order and ship it, it certainly didn't make the top of his rotten To Do List for at least a week or two…).

But the book would eventually arrive, in all its withered glory, and I would read it, and just appreciate his wisdom and acumen, enhanced by the book’s creases and tears and stains. These books had personality. And I’ve read almost every word that Hunter, in all his psychedelic brilliance, has ever written. I even have some twisted and misguided sense of ritual surrounding the reading of his books, which generally involves pouring myself a tall glass of whiskey on ice, turning on Cream or The Grateful Dead at unreasonable levels, and really trying to put myself into his story. Truth be told, that's still one of my favorite ways to unwind. Fear and Loathing On The Campaign Trail ’72 is the only thing that got me through the dreaded election of 2016, and The Great Shark Hunt and Hell’s Angels are my only refuge from the terrible times that this country seems to be currently weathering. Fear and Loathing in Las Vegas is something I can read day or night, and it makes me feel home. “We had two bags of grass, seventy-five pellets of mescaline, five sheets of high-powered blotter acid…” 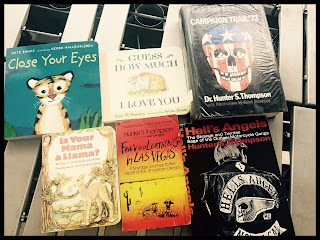 So yesterday, when ‘Is Your Mama A Llama’, ‘Close Your Eyes’, and ‘Guess How Much I Love You’ arrived in the mail, I was surprised at how giddy I was for these new arrivals. There would be no whiskey ritual surrounding these titles, no, this was a different trip altogether.

Yesterday, I started reading Fear and Loathing in Las Vegas for the millionth time, which opens with, “We were somewhere around Barstow, on the edge of the desert, when the drugs began to take hold.” And today, I will be sitting next to my pregnant wife, slowly sipping a tall glass of kombucha (with no ice), and will speak to her belly, “‘Is your mama a Llama’, I asked my friend Dave. ‘No she is not’, is the answer Dave gave”.

I have traded in Thompson for board books, whiskey for kombucha, and going to bed at midnight to going to bed at 9pm (because what drug0addled dope-fiend of a person has the energy to stay up past 9pm anyway, I mean Jesus, the sun is down, people, go to bed). And here’s the handle; I love it.

It wasn’t a change that I felt would happen, or at least happen this quickly. I thought there would be some crazy adjustment period, where I would slowly let go of my childless hobbies, but it really flips fast. I spend my time looking at what new tech tools new dads should buy first. How many apps can I download onto my phone to make this parenting thing as easy as possible? And how on earth do we choose a name for this little creature?

This is not to say that I have abandoned my old passions; I’ve read countless books on becoming a new dad, and one of the common themes throughout all of these scribblings is that as a dad, You Shouldn’t Lose Who You Are As A Person. And so I will let myself hold on to some of these more atavistic rituals that I have enjoyed throughout the years. There will still be whiskey, but I’ll probably just opt for a smaller glass. And on a Sunday afternoon, I may crack open Generation Of Swine for an hour and just relax.

But man oh man, when that Llama finally finds his mama, I can’t help but feel that same sense of relief that Dr. Gonzo and Raoul Duke felt when they finally left Vegas for good; things really are going to be just fine.