Preparing for a kid in no way shape or form actually prepares you for a kid. I feel it is akin to looking both ways for cars before crossing the street, but then getting hit by some random alien space ship crashing down on you from the sky. You just have no idea what is coming.
I mean, I read a bunch books. I watched videos on youtube. I was pretty sure that I knew what I was supposed to do. Put him to sleep, change his diaper, hang out with him, the usual baby stuff. I was also aware that my sleep would suffer. This is all stuff that I knew. What I didn’t know is that the devil is in the details, and sweet jesus that devil would not go unnoticed. 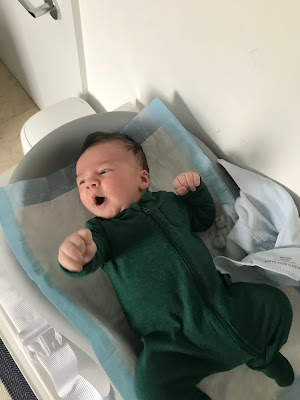 Changing diapers seems like a logical place to start. This is something that you do ten times a day at least, but at the beginning at least, it is one awkward gig. Now, maybe I’m just some irresponsible nitwit that just didn’t pay attention, but those videos sure made it look simple. The baby would just lay there, a big smile on its face, and the parent would go about their job of changing that barely-soiled diaper in a very nonchalant fashion. So it came as somewhat of a surprise to me the first time I actually attempted this feat that babies are NOT always calm and laughing on the changing table. In fact, they’re generally downright pissed. AND pissing. Like, literally. On me. A screaming mini human peeing all over me. The videos did not prepare me for this! I took the old diaper off, used approximately 37 water wipes to clean what seemed at the time to be an inappropriate amount of poop off of his entire torso area, and put the new diaper on. Well shit, how tight is this thing supposed to be? I was told that two fingers should be able to fit between the diaper and his skin. But I could make this thing tight AF and still get two fingers in. And geez I didn’t want to make it so tight that he couldn’t breathe, so I kept it loose. I mean, what’s the worst that could happen?

Well, it turns out that the worst thing that would happen is that he pees and poops and it goes all up his body and down his legs, and that’s why the diaper needs to be tighter. I am ashamed to say that it took upwards of two goddam weeks for me to realize that the reason he was getting pee on his onesies all the time was because I am not an intelligent person. Learned that one the hard way.

WHY DO THE VIDEOS MAKE IT LOOK TO SIMPLE…

At this point the diaper gig is an easy one, now that I’ve figured it out. It’s all about having A Plan, and sticking to The Plan. So now after I set him down on the changing table, I prepare everything with surgical precision. I open and lay out the fresh diaper, I prepare his butt spatula with the ointment, and I remove two water wipes in preparation for the task. Then I remove the diaper, clean the hell out of his area, apply the ointment, and get the new diaper on. This whole process now takes less than 20 seconds, but good lord I wish I had had this approach for the first couple of weeks. I’m pretty sure Rohen is less annoyed with me too…

The long and short of this pointless diatribe is that if you are preparing for a kid, you should still read the books and watch the videos and talk to as many new parents as you can. But don’t think that you know anything. Don’t you dare go into this gig with the mindset that you are prepared. Because that alien ship will crash down on your head with such ferocious intensity that you won’t even know what hit you.
at December 27, 2017